With the Option (⌥) key on the Mac, you have access to a wide range of Unicode and international characters under your fingertips without resorting to the Special Characters picker.

The information presented below assumes the “U.S. Extended” keyboard selected in Input Sources. Most of these shortcuts will work with standard “U.S.” input source but not all. 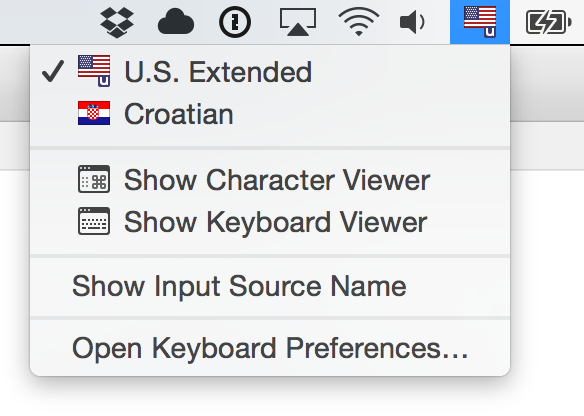 It’s worth noting that the - key on your keyboard is neither a hyphen nor a minus sign, it’s the “hyphen-minus” character. It’s often used as a dash, but shouldn’t if you have access to proper dash characters.

To memorize these punctuation characters, just remember they are all near the Return key:

You can see how the above four are easy to memorize; they are each located under the letter this diacritic is most commonly associated with. This doesn’t stop you from combining them with other characters, though; you can use ⌥+e a to get “á”, for example.

Finally, something that you will almost never use (except when typing my last name): Croatian.

Croatian diacritics may resemble accents, particularly for “ć”, but they in fact form separate characters (and sounds). True accents are almost never used in Croatian language, except when disambiguating homonyms.

“Combining characters” in Unicode are marks that modify other characters. For example, to add an acute to the e’s in “resume”, you could position the cursor after the “e” and type ⌥⇧+e. For diacritics, you can get combining characters on the Mac keyboard by combining Shift with one of the already mentioned Alt-based keystrokes.

Although “é” (e-acute) and “é” (e with a combining diacritic) appear to be identical, they are not. The former takes 2 bytes in UTF-8 while the latter takes 3. However, both should be valid for presenting to the end user, and engines that perform transliteration should take both forms into account.

Most, if not all of the aforementioned characters are available on iOS keyboard, too. By pressing and holding a single key, a list of related characters pops out: 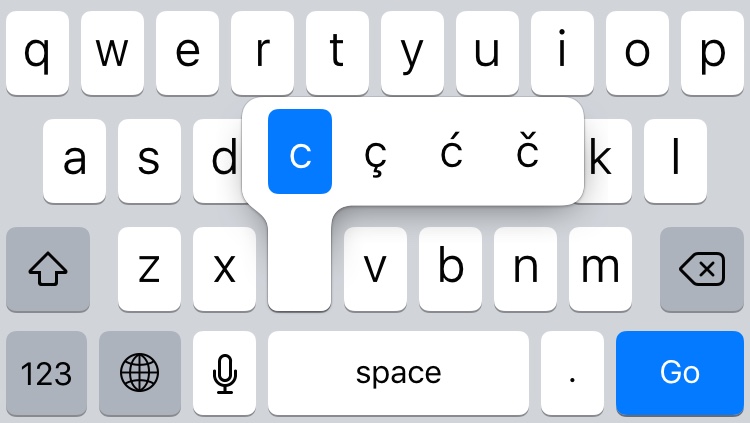 So even when writing tweets on the go, you have access to different dashes, curly quotes and more.