Every line of code comes with a hidden piece of documentation.

Whoever wrote line 4 of the following code snippet decided to access the clientLeft property of a DOM node for some reason, but do nothing with the result. It’s pretty mysterious. Can you tell why they did it, or is it safe to change or remove that call in the future?

If someone pasted you this code, like I did here, you probably won’t be able to tell who wrote this line, what was their reasoning, and is it necessary to keep it. However, most of the time when working on a project you’ll have access to its history via version control systems.

A project’s history is its most valuable documentation.

The mystery ends when we view the commit message which introduced this line:

Activating CSS transitions for an element just added to the DOM won’t work in either Webkit or Mozilla. To work around this, we used to defer setting CSS properties with setTimeout (see 272513b).

This solved the problem for Webkit, but not for latest versions of Firefox. Mozilla seems to need at least 15ms timeout, and even this value varies.

A better solution for both engines is to trigger “layout”. This is done here by reading clientLeft from an element. There are other properties and methods that trigger layout; see gent.ilcore.com/2011/03/how-not-to-trigger-layout-in-webkit

As it turns out, this line—more specifically, the change which introduced this line—is heavily documented with information about why it was necessary, why did the previous approach (referred to by a commit SHA) not work, which browsers are affected, and a link for further reading.

As it also turns out, the author of that mysterious line was me. There are ways I could have written that code itself better: by encapsulating the magic property access in a function with an intention-revealing name such as triggerLayout(), or at least by adding a code comment with a short explanation that this kicks off the animation. For whatever reason, I might have failed that day to make this particular code expressive. Code happens, and it’s not always perfect.

Even if this code was more expressive or if it had contained lines of code comments, a project’s history will be able to provide even richer information:

Code quality still matters a lot. But when pondering how you could improve your coding even further, you should consider aiming for better commit messages. You should request this not just from yourself, but from your entire team and all the contributors. The story of a software matters as much as its latest checkout.

I’ve already demonstrated how to use git blame from the command line above. When you don’t have access to the local git repository, you can also open the “Blame” view for any file on GitHub.

A very effective way of exploring a file’s history is with Vim and Fugitive: 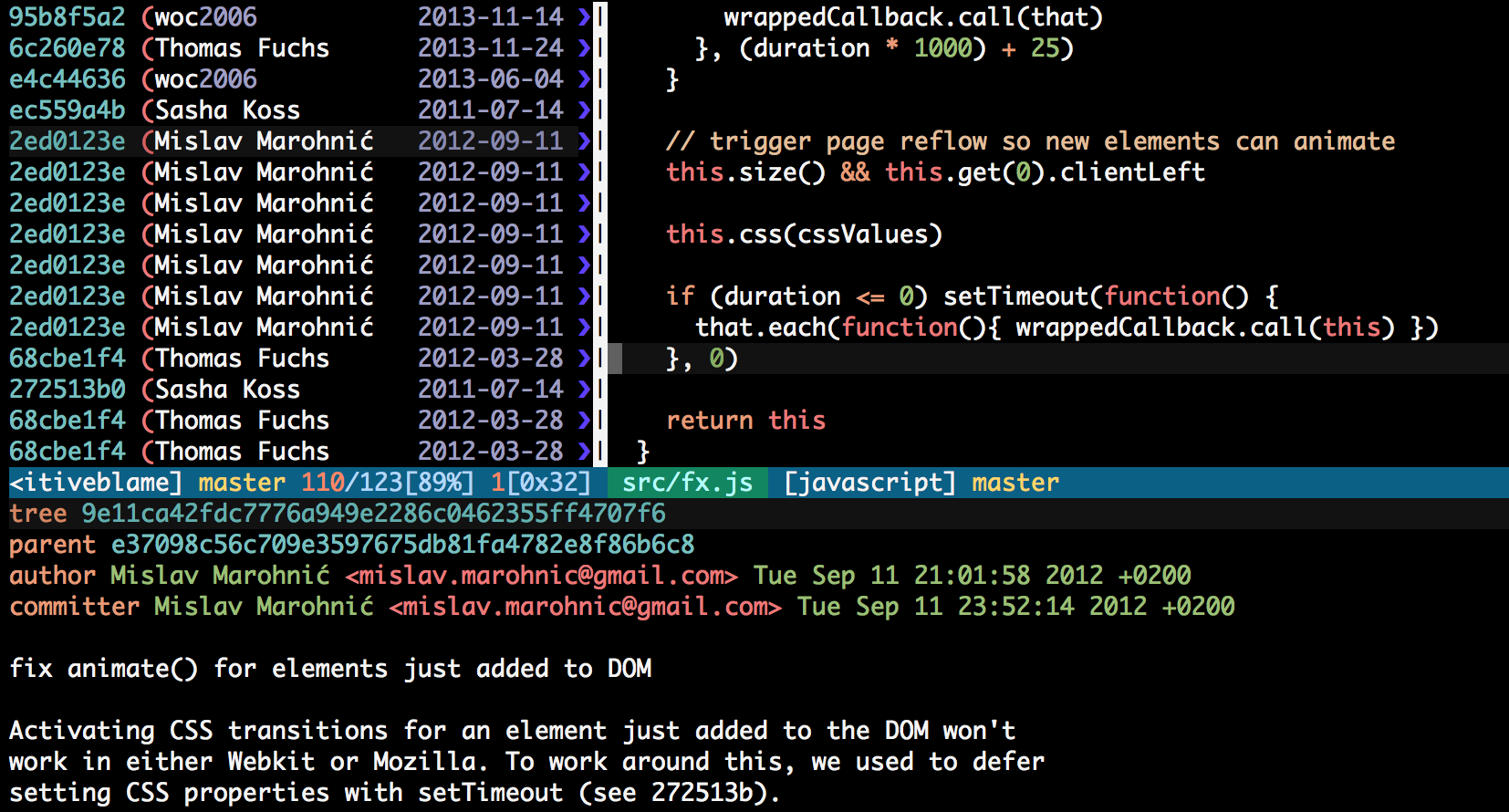 Find the pull request where a commit originated

With git blame you might have obtained a commit SHA that introduced a change, but commit messages don’t always carry enough information or context to explain the rationale behind the change. However, if the team behind a project practices GitHub Flow, the context might be found in the pull request discussion:

Here, a single commit SHA was enough to discover that it originated in pull request #42.

Sometimes you’ll be trying to find something that is missing: for instance, a past call to a function that is no longer invoked from anywhere. The best way to find which commits have introduced or removed a certain keyword is with the ‘pickaxe’ argument to git log:

This way you can dig up commits that have, for example, removed calls to a specific function, or added a certain CSS classname.

It’s possible to get valuable insight from history of a project not only by viewing individual commits, but by analyzing sets of changes as a whole. For instance, git-churn is a simple but valuable script that wraps git log to compile stats about which files change the most. For example, to see where the development of an app was focused on in the past 6 months:

Incidentally, such analysis also highlights potential problems with technical debt in a project. A specific file changing too often is generally a red flag, since it probably means that the code in that file either needed to be frequently fixed for bugs, or that the file holds too much responsibility in general and should be split into smaller units.

Similar methods of history analysis can be employed to see which people were responsible recently for development of a certain part of the codebase. For instance, to see who contributed most often to the API part of an application:

Being on the right side of history

Keep in mind that everything that you’re making today is going to enter the project’s history and stay there forever. To be nicer to other people who work with you (even if it’s a solo project, that includes yourself in 3 months), follow these ground rules when making commits:

Since you’ve read this far, I’ll reward you with an extra script. I call it git-overwritten and it shows blame information about original authors of lines changed or removed in a given branch:

This is useful when opening pull requests per GitHub Flow; you’ll want your pull request reviewed by colleagues but you might not be sure who to ping. With git-overwritten you’ll get the names of people who wrote the lines you just changed, so you’ll know who to @-mention when opening a pull request.